How to Pick Visual Content for Different Social Networks 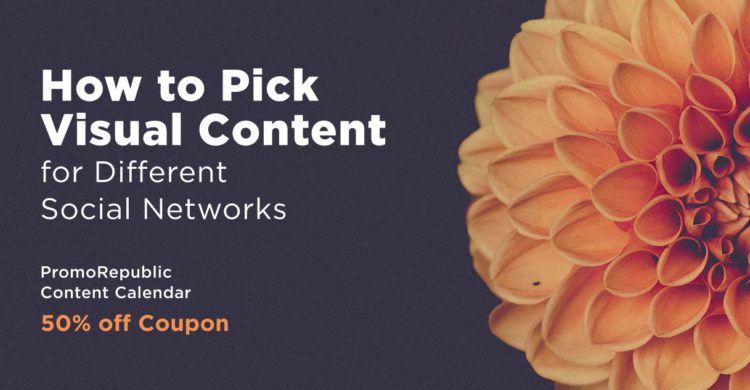 Being a social media marketer I’m convinced that visual content has the ability to hit your audience on a most personal level. I’ve written a lot on this topic for Social Media Examiner. This is because the human brain will process visual content more than 60,000 times faster than plain text. You can communicate simply using visual content, evoking emotion and attracting fans and followers with a simple image or set of images. But with so many different social media platforms, how do you know what visual content works for which network? In this article, you’ll learn what works for each channel, and see some examples of brands that are doing it right.

Studies show that Facebook posts that include visuals experience a 37% engagement increase. Additionally, people only remember 20% of what they read, but they remember 40% of what they SEE. Facebook is great for brands that want to start a conversation. Because you have an opportunity for unlimited text (something we don’t recommend you take advantage of) and the option to include a photo or video, Facebook allows you to tell a story. When you’re working with visual content, the goal is to tell that story with the image itself, and reach your users that way.

Facebook provides tons of engagement opportunity. And, as I mentioned above, visual content hits home faster and more effectively than text posts. So, how do you create the perfect visual content for Facebook? Let’s look at a brand who is winning in that space and dissect what’s so great about their strategy. 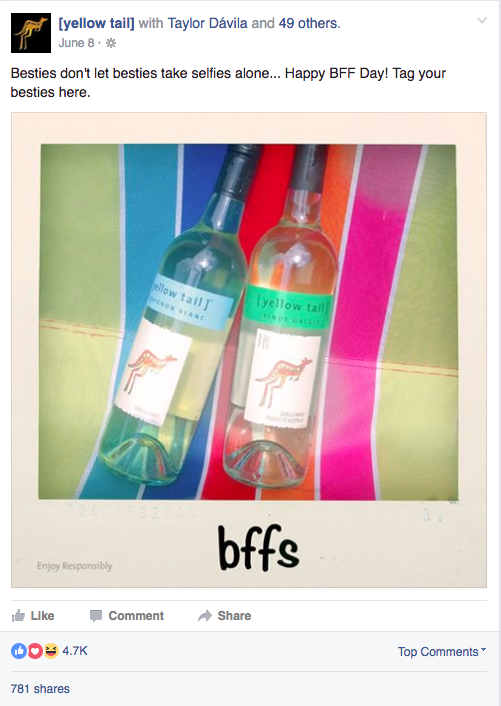 Yellowtail, a popular Australian wine company, has @yellowtailus, a Facebook page for U.S.-based Facebookers. The page itself has 1,398,809 likes at press time, and their posts get lots of engagement, like the one you see above. With 4.7K reactions, 781 shares and 755 comments, the stats on this post aren’t too shabby. So, what did Yellowtail do right?

Holiday posts engage most. Who doesn’t want to tag his best friend? I use PromoRepublic for my social media content creation and my holiday marketing. The content calendar is packed with suggestions, and the team updates the calendar frequently, so there are tons of special holidays for me to choose from. And, the templates make it easy to create a professional-looking post for one client, with a logo and a CTA, and then I can use the same template for another client, with different text, a different logo, etc. It makes it super easy for me to create tons of great posts for all my clients all in the same place.

Grab your coupons and get a 50% discount for individual and team plans:
PRINDIVIDUAL12
PRTEAM12

According to Buffer, tweets with visual content get retweeted 150% more than standard text tweets. That makes sense, in a way, since when Twitter first started you had to use third party image hosting to put an image out to your followers. By 2013, Twitter was showing images by default. Nowadays, when you compose a new tweet, you have the option of adding a photo or video.

Now, some things to note. A lot of brands are simply cross-posting pictures from other social channels. Dan Zarella did the research, and it turns out that tweets with Instagram links get retweeted 42% less often than Twitter-related picture options. Tweets that use Facebook image links are even less likely to get retweeted. HOWEVER, tweets that us pic.Twitter.com and TwitPic are more likely to receive some retweet love. Much more likely. Let’s look at a great visual Tweet and see what’s working. 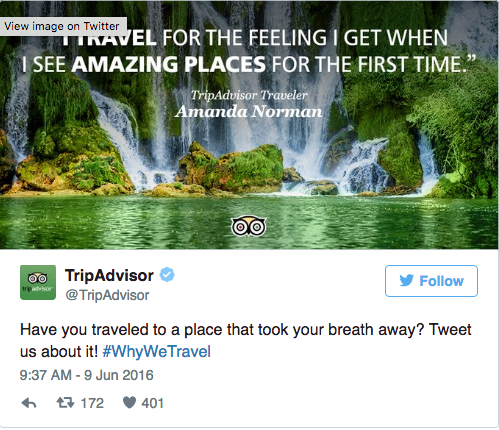 Trip Advisor has 3.16 million followers on Twitter, which is pretty decent. The travel planning website works to create stunning visuals that captivate their followers. What’s right about this tweet?

What we’ve learned here is that visual content is just as important on Twitter as it is on Facebook, but the way you post it matters. We’ve also learned that engagement matters on both channels (and, truthfully, will on all channels – that’s what social media is about) but you have a different set of rules to work with.

Instagram is still sort of the little brother of the social world. With 300 million monthly users compared to Facebook’s 1.4 billion, it may not seem on the surface to have as much power. But, Instagram is the younger consumer’s social channel choice, with the majority of users under 30 years of age. If a brand is marketing to the younger crowd, Instagram is their channel, and it’s important to know how to do it right. Sprout Social did a comparison of Quest Nutrition’s Facebook and Instagram post about #MondayMotivation. Even though the brand has twice as many Facebook fans than Instagram followers, the engagement post to post was telling. The same post got 21 likes on Facebook, but 2,400 likes on Instagram.

Obviously, there is value to marketing on Instagram. But this channel doesn’t even allow non-visual posts, so you know that your visual content has to be a cut above. Let’s look at a brand that “gets” IG and analyze what they did right. 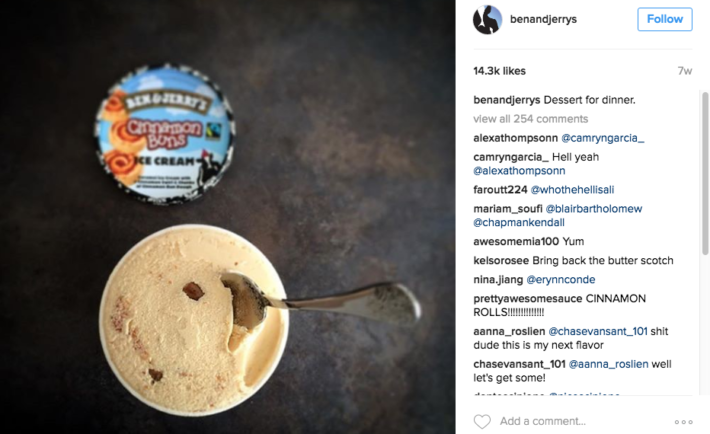 Ben & Jerry’s was one of the first brands to really adopt Instagram as a marketing channel. As a result, they have 655K engaged followers and their posts, like this one, get a lot of attention. We could have picked any of their posts, to be honest. They all get tons of comments and likes. This one, with 14.3K likes and 254 comments has the following going for it:

Ben & Jerry’s also limits the amount of social sharing they do – one source said three posts, per day, per channel. That way users don’t get tired of seeing their posts, and the brand has plenty of time to measure their engagement and alter their marketing strategy. We could all take a lesson from the ice cream kings.

LinkedIn, traditionally known as a business networking site, has more than 225 million users. But, by nature, it is also a social channel, and many big brands use it to publish thought leadership and build a following.

And it’s no surprise that, like other social media channels, visual content has a bigger bang that plain text. The same brains that process images more quickly are using LinkedIn, and that means your messaging on the popular networking site needs to have strong visuals.

The way most users do this is by using the LinkedIn Publisher platform, which is only available for personal profiles. This is a place for users to publish blog posts, and it’s a great opportunity to include an evocative image. HOWEVER, you can post updates from your business page that include visuals, employ showcase pages to engage specific audiences, and active Slideshare to share a visual presentation. For the purposes of this post, let’s look at a brand that uses visuals well in their update section. 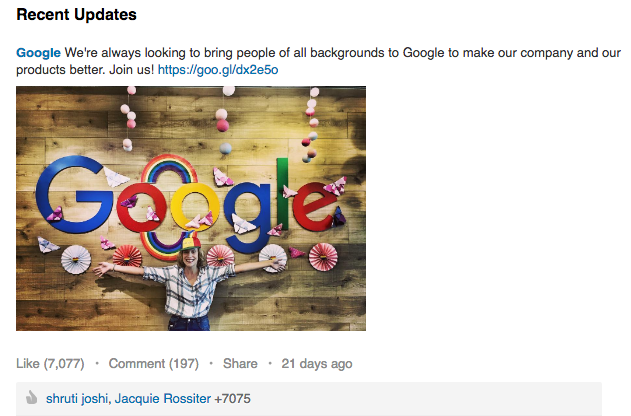 Google does just about everything right, and that includes their LinkedIn business page. This image, that garnered 7,077 likes and 197 comments, was designed to recruit new employees. Here is why it’s a great post:

LinkedIn isn’t just for online resumes anymore. It’s a valuable, important social channel that deserves some energy and attention. Pay attention to what great brands are doing on LinkedIn, and make sure your personal profile reflects your brand’s image. You could end up with great new contacts, employees and investors.

Not everyone has to be a graphic designer. You can use one from this short list:

Do you agree with our tactics? Do you have any tips or tricks for a particular social network? What other social networks are you using for marketing? Please comment below and let’s have a conversation!

Our local marketing platform, tailored for multi-location businesses and marketing agencies, provides the insights and tools to manage all your channels and locations in one place to generate more local sales

Creating a social media marketing strategy from the ground up can be brutal. Even though social media seems transparent at...