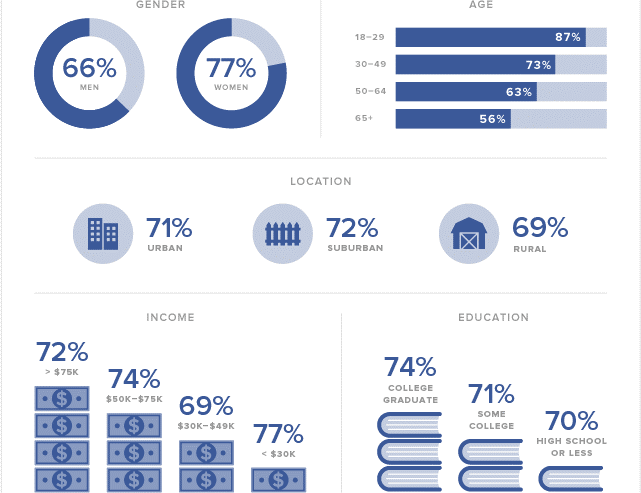 All Facebook demographics that matters for social media marketers

Since it`s release in 2004, Facebook collected over two millions of users and, of course, in this number of users we can find different demographics. You probably think that it`s just a statistic and you don`t need to pay attention to it. However, it`s not true. Facebook demographics helps us to make a complete analysis of your audience, it`s activity and feedback they give to you.

In this article, we will show you the best Facebook user demographics that could make a huge impact on your social media marketing.

According to the statistics on the end of March of 2018, there are over 2.2 billion of active Facebook users. As you see, Facebook is really the largest social media in the world.

If we won`t look on the people of age over 65, we will see that users of all age categories have registered accounts on Facebook. Aside from YouTube, no other social channel has such a board take-up range across age groups.

This may sound a little bit strange, but it`s true – teenagers believe that the largest social media platform was made only for people in age from 50 and higher. However, today we can find many accounts of people in age from 12 to 17.

Someone say that this is not normal, but parents don`t think so. For them, it`s very important to keep an eye on their children everywhere where it`s possible. Even in social media.

Well, it`s normal, because Facebook was made for all people from a bigger part of countries in the world. So, if you meet a person from Spain or Portugal who are an active Facebook user, it`s ok.

Over 50 percent of the social network`s 2 billion users speak a non-English language. If you know what language your audience speaks, it will be much easier to communicate with them. However, if you will try to communicate in English, it could be a little bit difficult for them.

A study that examined the most common languages Facebook bots were speaking found that English is not the most popular among the audience. Portuguese, French and Spanish are holding the highest positions. Than we can see Italian, Arabic, Russian, Chinese, Dutch and German.

Such Facebook demographic could help developers and brands to find potential clients who are able to pay for an expensive service. For example, 66 percent of US Facebook users say that they earn more than $30 000 per year. That`s good.

Students during boring lessons, student after classes, adults on a coffee break. The first thing they all do is to pick up a phone and open their Facebook profile. It`s good because if you are developer who needs his posts to be seen regular, that`s the best condition.

In our days, we can`t imagine a person without a smartphone. It`s normal for people to open an application and look through the posts in the news feed while coming home from work or school. They won`t open the page again while working on the computer, because now it`s unusually for them.

We can continue this list for a long time, so you will get bored of reading all points. We are sure that these twelve points will make you sure that Facebook users demographics plays a huge role for social media developers and marketers. We hope you enjoyed the article and will use this information while working with your business on Facebook.